We have been in Wellington International College Tianjin since early February and are enjoying every minute.  We are working with everyone from children in reception through to year 11 GCSE drama students.

Any spare time we have we try to make ourselves useful around the school by using drama or music to compliment other subjects .  We are also helping out with the inter house singing competition, Sami composing harmonys with one house and me (Stuart) choreographing fight scenes between three Rockys and a boxing tiger! 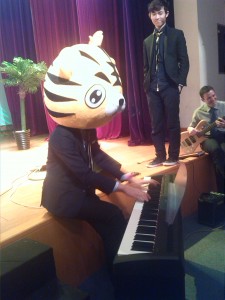 A tiger relaxes between bouts

A lot of the children have English as a second language and so mime and physical theatre is proving popular. They have come up with great scenarios set in a cafe, a cinema and a library with a librarian who won’t take any nonsense.

Last weekend (March 9th) we took part in The Festival of Education, a first for Tianjin.  We ran comedy workshops that explored different styles and genre of comedy.  As is the way with Round Midnight we decided a workshop wasn’t enough and encouraged the group to go that one step further.  At the end of the three hour session the participants had produced a show for friends and family.  The reaction was great and we’re really proud of everyone who took part. 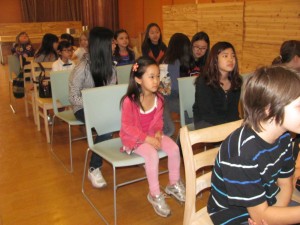